Is anyone else obsessed with poufs?

I've been seeing them all over home blogs, as well as in fancy-schmancy designers' homes. I've wanted one for a while, but as I've mentioned before - I have an aversion to spending money on anything I don't need. Actually, I always turn to Eric if I'm trying to justify a purchase. He can convince me to buy a cute dress every once in a while, and he reminds me that sometimes it's OK to spend money (check out the story of the blender). Anyway, I asked Eric if we should get a pouf because I really wanted one. He said, "um, no. What would we even do with it?"

Honestly, he's right. It's kind of silly. But I just think they are sooooo pretty. I really want this one: 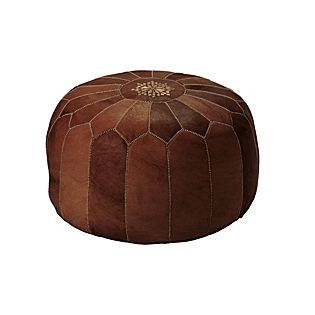 I decided to make one! Want to see it? 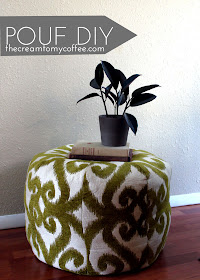 Ok, so it's definitely not as awesome as the leather one above, but I am so pleased with it! And it was really easy to sew. Even for a novice like me. I used this tutorial:

There is obviously no need for me to re-write the tutorial, so if you're interested check out the simple step-by-step instructions. I do have a couple of comments if you decide to give it a try: 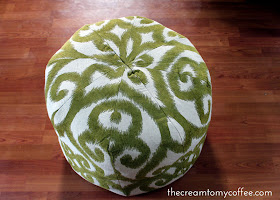 If you're wondering what I use it for, well, it comes in handy all the time. I use it to sit on, I sleep on it, I eat on it, I read on it, I pray on it, I put stuff on it. Juuuuust kidding. I've literally put my feet on it once. But hey, I like the way it looks.

Thanks so much for your comment! I reply to my comments via email, but I can't do that if you are a no-reply blogger (if you don't know what that means, you probably are). Check out this tutorial to fix it!